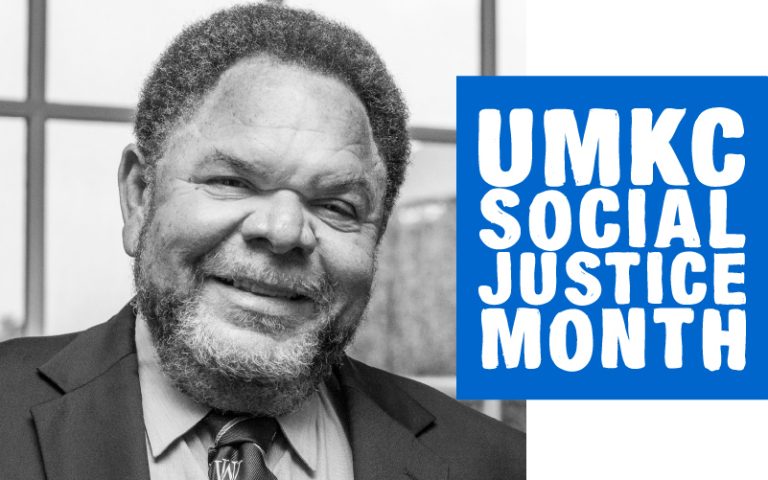 In alignment with Goal 4.3 of UMKC’s Strategic Plan is to “Engage students, faculty and staff in learning varied perspectives of domestic and international diversity, including social justice.” UMKC will host its first-ever Social Justice Month, a month-long series of events and programs that focus on the important issues in social justice at both the local and national levels. The month is in collaboration with our University partners and will feature events hosted by the Division of Diversity and Inclusion as well as other campus and community partners.

John Baugh is the Margaret Bush Wilson Distinguished University Professor at Washington University in St. Louis. He received a bachelor’s degree in Communication and Rhetoric from Temple University in 1972, and an M.A. and Ph.D. in linguistics at the University of Pennsylvania under the supervision of William Labov in 1976 and 1979 respectively. His dissertation, Linguistic Style-Shifting in Black English, is based on a four-year longitudinal study of African American adults in formal-to-informal settings. Since 2005 he has taught at Washington University, where he served as Director of African and African American Studies until 2010 while holding academic appointments in Linguistics, Psychological and Brain Sciences, African and African American Studies, Anthropology, English, and Urban Studies. He is Professor Emeritus of Education and, by courtesy, Linguistics at Stanford University. He taught previously at the University of Texas at Austin and Swarthmore College. With post-doctoral funding from the Ford Foundation he was a research fellow at the Center for Applied Linguistics in 1982, and with National Science Foundation support he was a fellow at the Center for Advanced Study in the Behavioral Sciences in 1988.

These events are free, open to the public, and seating is on a first come, first serve basis. However, ON‐LINE REGISTRATION IS REQUIRED to monitor capacity, ensure space, and meet accommodations. Every attempt will be made to allow all to enjoy this free event. Any venue update will be emailed to registrants.

Division of Diversity and Inclusion
diversityandinclusion@umkc.edu
816-235-6728