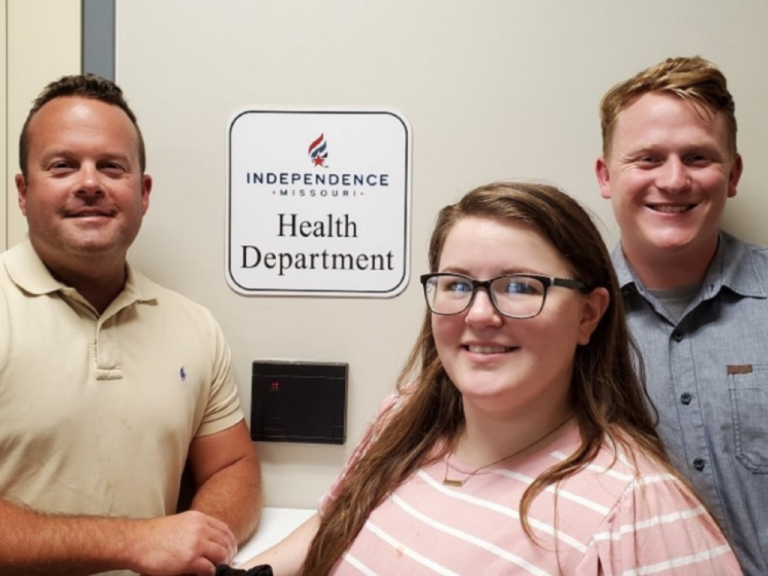 When the city of Independence, Missouri, wanted to re-institute its Health Department, two recent graduates of the School of Nursing and Health Studies — and an adjunct professor — were there to help.

The process showed the value of the university to its government and community partners, and it gave the graduates full-time jobs in their field of public health.

“I chose public health because I wanted to explore more upstream methods to improve the public’s health rather than focusing my efforts on them once they already made it to the hospital,” said Smith-Griffin, an Independence native. “I’m re-establishing community-based programs since the Health Department just re-opened a few months ago after being shut down for a few years.”

Another public health graduate, Conner Berens, is from nearby Lee’s Summit and was a familiar face around Independence government. “I have volunteered for the City of Independence Office of Emergency Preparedness since I was a sophomore in high school,” he said. So when there was an opening for a public health response planner, he jumped at the chance.

Berens had hoped to find a job relating to public health or emergency management right out of school, and he said UMKC prepared him to do just that.

Besides their passion for public health and the lessons and experiences gained at UMKC, Smith-Griffin and Berens graduated at an opportune time, when Independence was re-establishing its Health Department.

In 2018, Independence chose to stop some department functions that were duplicated by Jackson County, such as those related to vital records and vaccinations, and shifted other functions to different city departments. But with the onset of the pandemic, it made sense for the city of around 125,000 residents to have its own Health Department again.

One longtime city administrator tasked with reinstituting the department, Mike Jackson, is an adjunct faculty member with UMKC’s public health program. Jackson has worked for the city about 20 years, holding various posts in environmental health and public works. “So I know about various funding sources, and what the Health Department looked like before and how its functions were reorganized,” he said.

Jackson also knew UMKC could be a great resource. “Around 2014 when the nursing school was putting its public health program together, I was asked to design the environmental health course. And then I was asked to teach it,” he said. “For a project in my class, Conner interned with our emergency preparedness and fire department.”

Jackson also told Smith-Griffin, whose senior project he had supervised, about the job opening she eventually filled. “But then I got out of the away, removed myself from the hiring process,” Jackson said. “It was her turn to shine, and I didn’t want anyone thinking she didn’t deserve the job.”

The re-established Health Department was officially recognized by the state late last year, and Jackson, Smith-Griffin and Berens are busy getting all its functions coordinated and running again.

“I am working on two grants right now,” said Smith-Griffin, who has a small child and great interest in child and maternal health. “One is focused on maternal child health and the other is focused specifically on child health.”

“I have had to find out who my target population is for my grant, a significant problem they have, and an intervention that could improve their health,” Smith-Griffin said. “I have had to write SMART goals and objectives,” SMART standing for Specific, Measurable, Assignable (or Achievable or Attainable), Realistic (or Relevant) and Time-related (or Time-bound).

Berens is working with COVID-19 surveillance and epidemiology, and with updating emergency response plans.

“Future tasks include developing plans and partnerships to prepare for public health disasters such as environmental crises, natural disasters, disease outbreaks, bioterrorism and other events that result in a mass medical surge or immediate threat to public health,” he said.

During school, Berens also volunteered for the Medical Reserve Corps of Kansas City in response to COVID-19. He said volunteering was a great supplement to his coursework, and he encourages current students to sign up for medical and non-medical opportunities at https://www.mrckc.org.

For his part, Jackson has been busy restarting Health Department functions that had reverted to the county, such as vaccine clinics and disease tracking and tracing, and reintegrating other functions that the city retained, such as restaurant health inspections.

“I know a student can’t always parlay volunteering or an internship into a fulltime job,” Jackson said, “but Conner and Halie showed us what they could do and really shined. That reflects well on them and on UMKC.”

Story by: By Greg Hack, hackg@umkc.edu

School of Nursing and Health Studies

Food Manufacturing and the Economy

Climate, Markets and Politics: Food and Agriculture at a Generational Crossroads