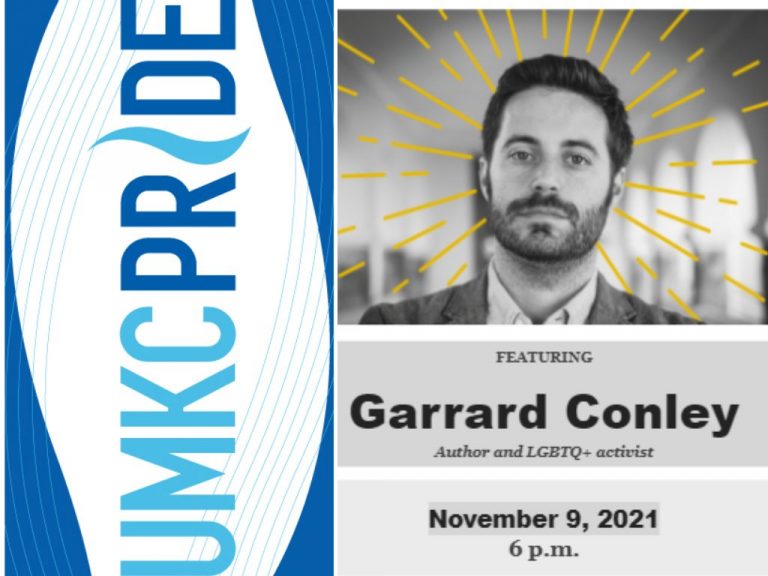 You are invited to join as the UMKC Pride Lecture Series returns for 2021, the year featuring Gerrard Conley, author of the acclaimed memoir Boy Erased, a beautiful, raw, and compassionate memoir about identity, love, and understanding. Now a major motion picture starring Nicole Kidman, Russell Crowe, and Lucas Hedges, directed by Joel Edgerton.

Coming of age as the son of a Baptist pastor in rural Arkansas, Garrard Conley was terrified and conflicted by his sexuality; he had never even met another gay person. At age nineteen, his worst fear came true when he was outed to his parents. They gave him an ultimatum: he could either be shipped to a “conversion therapy” facility in the hope to “cure” him of his homosexuality, or he would lose his family, his friends, and his God. He chose the facility, a decision that would lead him through a brutally institutional Twelve-Step Program. He was supposed to emerge cleansed of impure urges, stronger in his Christian faith, and—most importantly—heterosexual. Instead, Conley developed the strength to search for his true identity and to forgive his family.

A popular speaker, he lectures at schools and venues across the country on radical compassion, writing through trauma, and what it means to grow up gay in the South. He has received scholarships from the Bread Loaf, Sewanee, and Elizabeth Kostova Foundation Writers’ Conferences and has facilitated classes for Catapult, Sackett Street Writers Workshop, and the Fine Arts Works Center in Provincetown.

Learn about additional programs, scholarships, trainings, resources in the Rainbow Lounge, celebrations and more available through UMKC LGBTQIA Programs & Services, founded in 2003 with the support of the Office of Student Involvement.

Division of Diversity and Inclusion Office Of Student Involvement